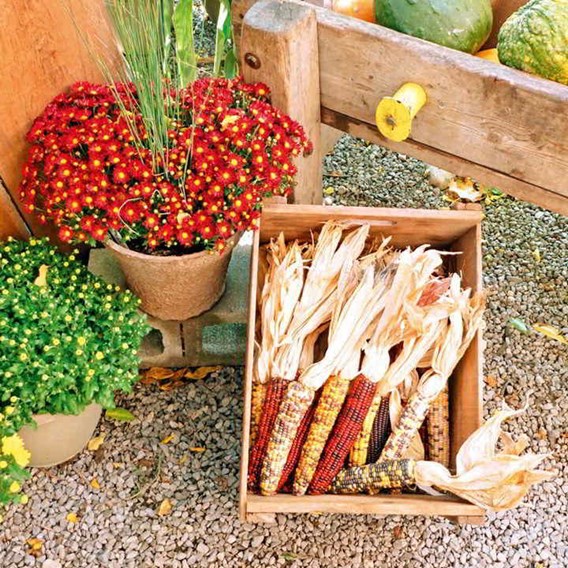 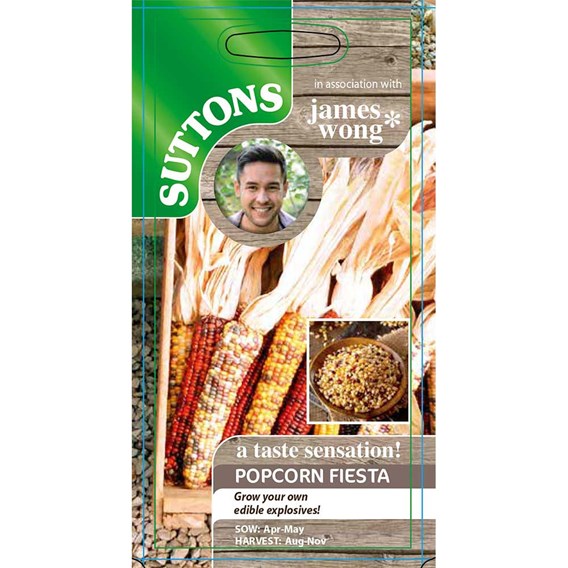 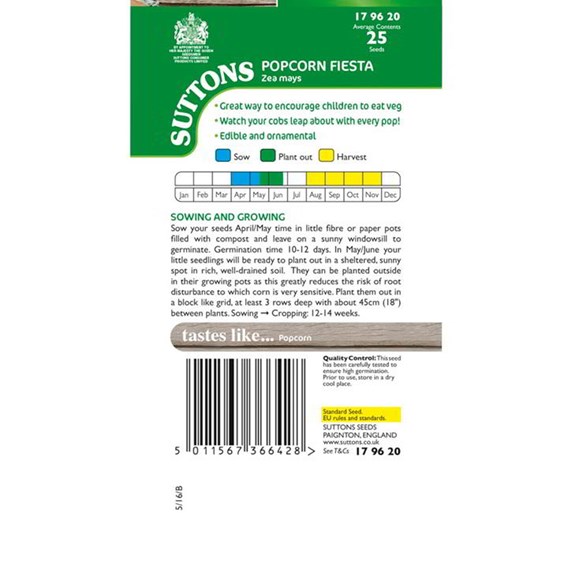 This multi-coloured popping corn is both edible and ornamental. A great way to encourage children to eat veg - watch your cobs leap about with every pop!Tastes like popcorn. As tasty as it is ornamental, Popcorn Fiesta is the one sure-fire way to get kids to eat their veg.Particularly when they get to see the whole ear somersaulting in the microwave, spitting out little white clouds of deliciousness!

Growing popcorn is just as easy as regular sweetcorn and can essentially be treated in the exact same way. The only key difference between them is that popcorn requires a slightly longer growing season to allow its kernels to fully ripen, unlike sweetcorn which is harvested when its ears are still immature. Origin: South America - Latin name: Zea mays. Sow: April-May. Harvest: August-November.

Full growing instructions given on packet. Sow your seeds March/April time in little fibre or paper pots filled with compost and leave on a sunny windowsill to germinate. In May/June your little seedlings will be ready to plant out in a sheltered, sunny spot in rich, well-drained soil. They can be planted outside in their growing pots as this greatly reduces the risk of root disturbance to which corn is very sensitive. Instead of planting these in single-file rows, you should set them out in a block-like grid, at least 3 rows deep with about 45cm (18") between plants. As your popcorn grows, mulch them with a nice thick layer of organic matter, which can be mounded up around their roots to give these tall plants an extra bit of stability from high winds. Keep them well-watered in dry weather, particularly when the plants are flowering (i.e. when little tassles of silk appear half-way down the stem). Tapping the tops of the plants when the male flowers emerge (brown antennae sticking out the top of the plant) will further help pollination. Your popcorn is ready to pick when the husks surrounding each ear become dry and papery - in the mid-late autumn. Harvesting is simply a question of grabbing each ear and yanking it down firmly, twisting the cob as you do this. 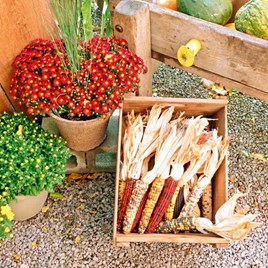